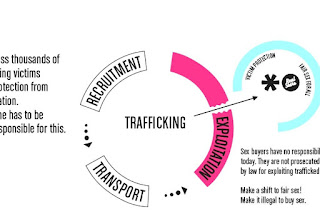 Human trafficking in South Africa refers to the practice of forced labour and commercial sexual exploitation, using the country as a designated source and destination for importing and exporting trafficked men, women, and children. South African girls are trafficked within their country for the purposes of commercial sexual exploitation and domestic servitude, while boys are trafficked internally for use in street vending, food service, and agriculture. Anecdotal evidence suggests that South African children are forced to provide unpaid labour for landowners in return for their family occupying land or accommodation, or maintaining labour tenancy rights.

Top 10 Countries Known for HUMAN TRAFFICKING - Human trafficking is one of the most despicable crimes that one person can commit against another, and it is sadly way too common. The FBI says that it is the ...

The Government of South Africa does not fully comply with the minimum standards for the elimination of trafficking; making no significant efforts to do so. In 2008, South Africa was placed on the US Department of State's Tier 2 list for a fourth consecutive year for its failure to show increasing efforts to address trafficking. The government provided inadequate data on investigations or prosecutions of trafficking crimes or on resulting convictions or sentences. In addition, it did not provide information on its efforts to protect victims of trafficking and continued to deport and prosecute suspected foreign victims without providing appropriate protective services.

The South African government did not provide information on anti-trafficking investigations that resulted in the punishment of any traffickers in 2007. For the majority of the reporting period, South Africa did not have laws that specifically prohibited trafficking in persons, though a variety of other criminal statutes, such as the Prevention of Organized Crime Act, were used to prosecute trafficking crimes. Law enforcement authorities could also use existing laws prohibiting involuntary servitude, child labour, and forced labour to prosecute labour trafficking cases, but do not appear to have done so. The lack of specific anti-trafficking statutes and explicit penalties for trafficking crimes continued to hamper South African law enforcement efforts in 2007, as many working-level police, labour, and social welfare officials possessed little understanding of the crime or did not view it as part of their responsibilities. However, in December 2007, several sections of the Sexual Offenses Amendment Act came into force, including Chapter 7 Part 6 which contains broad provisions against sex trafficking, but makes no provision for victim protection. Implementing regulations for the Children's Act of 2005 remained unfinished, preventing use of the law's provisions on child trafficking. The comment period on a draft for a comprehensive human trafficking bill closed in June 2007 and the South African Law Reform Commission (SALRC) staff finalized the text for recommendation to the Department of Justice in early 2008.

Although the government initiated a number of significant investigations during the reporting period, it made little progress in prosecuting or convicting suspected traffickers. As some parents give consent for the initial travel, the Cape Town magistrate's court in December 2007 dismissed charges against a man accused of trafficking boys to the city for street vending and detaining them against their will without pay. In March 2008, the SAPS (South African Police Service) arrested 27 prostituted Chinese women, as well as the 7 men accused of transporting them to South Africa and selling them into the sex trade; a police spokesman indicated that the women entered the country illegally and would be deported.

The status of the Department of Labour's investigations, if any, into cases involving child labour trafficking is unknown; also unknown are any prosecutions of child labour trafficking. In early 2007, Labour Department officials conducted a week of surprise visits to homes employing adult domestic workers to inspect working conditions; the results of these inspections are unknown. The government did not provide information on the status of pending cases reported in 2006. The South African Police Service has a Human Trafficking Desk within its Organized Crime Unit; the government did not provide information related to actions or investigations taken by the Desk during the reporting period. The government did not document or track anti-trafficking law enforcement efforts or provide specialized anti-trafficking training to law enforcement, prosecutors, or judicial personnel. During 2007, there was little cross-border cooperation on human trafficking between the government and its neighbors. Some local law enforcement officials are believed to be connected with organized criminal elements that engage in human trafficking.

Organizations working to help trafficked children continued to lament South Africa's shortage of social workers, a situation resulting in inadequate case monitoring and follow-up, and failure in some cases to accompany children to court. The government actively encouraged victims' assistance in the investigation and prosecution of their traffickers; South Africa's witness protection program safeguarded at least ten Thai trafficking victims during the year to enable their involvement. The government provided these witnesses shelter and modest food stipends. Despite this positive development, the government continued to arrest and, at times, prosecute suspected trafficking victims for unlawful acts committed as a direct result of their being trafficked, as noted in the aforementioned case of the 27 Chinese women. In addition, extensive delays in scheduling court appearances have resulted in some alleged victims choosing not to testify during the trial of their traffickers. However, the new Sexual Offenses Act states that sex trafficking victims are not liable to stand trial for any criminal offense, including any migration-related offense, which was committed as a direct result of being trafficked. No similar provision exists for victims of labour trafficking. The lack of national coordination and procedures for victim protection continued to lead to deportation of most foreign victims before they were provided protective services or were able to give evidence in court. Immigration officials did not attempt to identify trafficking victims among the thousands of undocumented foreigners they detainedâ€"notably Zimbabweans and Mozambicansâ€"before deporting them.

CWAG AAP on Twitter: "The African countries in tier 2 include .... Source : twitter.com

The government demonstrated minimal progress in combating human trafficking through prevention efforts. It conducted no anti-trafficking information or education campaigns during the reporting period. The Sexual Offenses and Community Affairs Unit of the National Prosecuting Authority (NPA/SOCA) serves as the de facto lead of the government's anti-trafficking effort and chairs the Trafficking in Persons Inter-sectoral Task Team made up of government departments, IOM, United Nations Office on Drugs and Crime, and a local NGO. The Task Team produced no significant outcomes in 2007. In January 2008, NPA/SOCA established an internal Human Trafficking Unit consisting of a national trafficking coordinator and a program manager. This Unit is tasked with reviving the Inter-sectoral Task Team and undertaking data gathering and public awareness raising activities, as outlined in the government's 2006 anti-trafficking plan of action. NPA/SOCA launched a website in December 2007 outlining its proposed strategy for responding to human trafficking. The website also provides the public with information on the nature of human trafficking and instructions for reporting a case or obtaining victim assistance.

The government made no progress in investigating the cross-border trafficking of Mozambican, Malawian, and Zimbabwean children for agricultural labour. In January 2008, however, the government signed a Memorandum of Understanding with the Zimbabwean government to conduct a joint project to regularize the status of illegal Zimbabwean migrant farm workers in South Africa's Limpopo Province and ensure them proper employment conditions. The government did not undertake efforts to reduce domestic demand for commercial sex acts or to combat child sex tourism during the reporting period. All South African troops destined for peacekeeping missions abroad are provided training on sexual exploitation issues prior to their deployment.