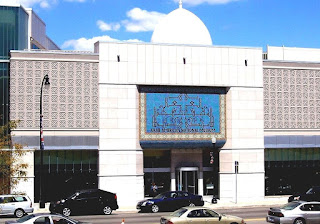 The Arab American National Museum (AANM, Arabic: Ø§Ù„Ù…ØªØ­Ù Ø§Ù„Ø¹Ø±Ø¨ÙŠ Ø§Ù„Ø£Ù…Ø±ÙŠÙƒÙŠâ€Ž), which opened in 2005, is the first museum in the world devoted to Arab American history and culture. Located in Dearborn, Michigan, the Museum seeks to dispel misconceptions about Arab Americans and other minorities.

The museum features two permanent exhibits. The first floor features the contributions of the Arab civilization to science, medicine, mathematics, architecture, and the decorative arts. The second floor focuses on the Arab experience in America, including a gallery about prominent Arab-Americans such as Ralph Nader and Helen Thomas and displays of documents and artifacts from Arab Americans related to immigration and the immigration process. The AANM also includes two large gallery spaces for the exhibiting of art. The Museum's inaugural exhibition In/Visible featured a number of Arab-American and Arab artists including Emily Jacir, John Halaka, Athir Shayota, Helen Zughaib, Rheim Alkadhi, Abdelali Dahrouch, Sumayyah Samaha, Mariam Ghani and Doris Bittar and was curated by Salwa Mikdadi.

Construction of the museum cost $15 million. Donors included Chrysler, General Motors, the Rockefeller Foundation, Saudi Arabia and Qatar. The museum is also a part of the Smithsonian Affiliations.

The Arab American National Museum's mission is to document, preserve, celebrate, and educate the public on the history, life, culture and contributions of Arab Americans. The museum serves as a resource to enhance knowledge and understanding about Arab Americans and their presence in the United States.

DIWAN: A Forum for the Arts is a biennial program of the Arab American National Museum (AANM). DIWAN unites Arab American artists, scholars and performers representing myriad academic fields and artistic genres for a weekend dialogue that reinforces the AANM's commitment to providing a place for community members and artists to meet, exchange ideas and exhibit their work. DIWAN also encourages audiences to explore the boundaries of art in addressing social issues related to Arab Americans and the community at large. Notable presenters at the 2009 DIWAN conference include writer Najla Said, poet Suheir Hammad, artist Wafaa Bilal, and poet Remi Kanazi.

Global Fridays is a periodic music program at the AANM that promotes World Music. Though Global Fridaysis held at the Arab American National Museum the music is a diverse mix from Mexican American roots music to Chinese Classical and Rock.

Arab Film Festival is an annual film festival put on by the AANM that showcases a number of Arab and Arab American films over a weekend. Past festivals have celebrated the career of a particular Arab filmmaker or director. The 2008 Arab Film Festival honored the work of Egyptian film director Youssef Chahine and showed his films The Cairo Station and The Destiny. The festival also features short films such as Kemo Sabe the story of Yussef, a six-year-old Arab-American boy who dreams of being the Cowboy instead of the Indian on the playground.