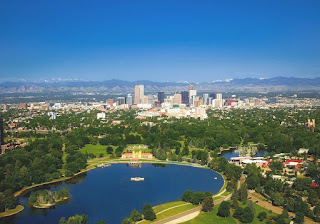 Denver Water serves 1.4 million people in the City and County of Denver, Colorado, and a portion of its surrounding suburbs. Established in 1918, the utility is a public agency funded by water rates and new tap fees, not taxes. It is Colorado's oldest and largest water utility.

The first residents of the Denver area drank water directly from the creek and river. Surface wells and buckets of water sufficed for a while as a delivery system, but they soon proved inadequate. Irrigation ditches were the next step forward.

In 1870, when the rapidly growing community had a population of almost 5,000, the Denver City Water Company was formed. In 1872, with a large well, a steam pump and four miles (6Â km) of mains, Denver City Water Company began to provide water to homes. Over the next two decades, 10 water companies fought, collapsed or merged. Several companies merged, and in 1894, the Denver Union Water Companyâ€"predecessor of Denver Waterâ€"emerged to establish a stable system.

In 1918, Denver residents voted to form a five-member Board of Water Commissioners and buy the Denver Union Water Company's water system for $14 million, creating Denver Water. From that time on, Denver Water planned and developed a system to meet the needs of the people of Denver and the surrounding areas.